Smoking is addictive and causes a number of serious diseases, such as cardiovascular disease, lung cancer, and chronic obstructive pulmonary disease (COPD).

Despite existing strategies to reduce smoking-related harm (i.e., preventing initiation and promoting cessation of smoking), it is estimated that more than one billion people worldwide will continue to smoke in the foreseeable future (Eriksen et al., 2015).

Tobacco Harm Reduction was defined by the U.S. Institute of Medicine (IOM) as “decreasing total morbidity and mortality, without the complete elimination of tobacco and nicotine use.” The IOM referred to “potentially reduced-exposure products (PREPs) as having reductions in exposure to one or more tobacco toxicants” (Institute of Medicine, 2001).

Tobacco Harm Reduction is based on encouraging smokers to switch to less harmful products that emit significantly lower levels of toxicants while providing levels of nicotine comparable to cigarettes. The U.S. Family Smoking Prevention and Tobacco Control Act embraces the concept of Tobacco Harm Reduction and defines a modified risk tobacco product (MRTP) as any tobacco product that is sold or distributed for use to reduce harm or the risk of tobacco-related disease associated with commercially marketed tobacco products (Food and Drug Administration (FDA), 2009).

Candidate MRTPs include products such as e-cigarettes and heat-not-burn products as well as other smokeless tobacco products. 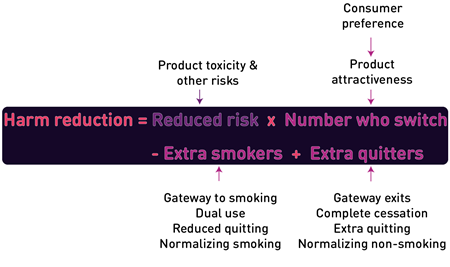 As a result, numerous studies conducted with various candidate and potential MRTPs have been published by the companies that develop them.

Recently, several independent reports and studies reviewing the available science on heated tobacco and e-vapor products have been published:

A review by Public Health England (McNeill et al., 2018) mentioning more than 32,000 e-cigarette and nicotine-containing e-liquid products that had been notified per the European Union Tobacco Products Directive concluded that“Widespread misperceptions about the relative risks of nicotine and tobacco need to be addressed and corrected,” and that “Vaping poses only a small fraction of the risks of smoking and switching completely from smoking to vaping conveys substantial health benefits over continued smoking. Based on current knowledge, stating that vaping is at least 95% less harmful than smoking remains a good way to communicate the large difference in relative risk unambiguously so that more smokers are encouraged to make the switch from smoking to vaping. It should be noted that this does not mean e-cigarettes are safe.” The review also mentions that “More research on nicotine in comparison to tobacco cigarette smoking is needed” and that “There is a need for more research that is independent of commercial interests” for heated tobacco products.

Similarly, a review entitled “Public health consequences of e-cigarettes” was published by the National Academies of Sciences, Engineering, and Medicine, a U.S.-based organization of leading researchers (National Academies of Sciences and Medicine, 2018). After analyzing the results of more than 800 peer-reviewed scientific studies, they concluded that “There is conclusive evidence that completely substituting e-cigarettes for combustible tobacco cigarettes reduces users’ exposure to numerous toxicants and carcinogens present in combustible tobacco cigarettes.” However, they also point out the lack of long-term data from repeated inhalation exposures.

In our view, while evidence regarding the harm reduction potential of candidate MRTPs has accumulated rapidly in the scientific literature, it is essential to share the scientific basis of product assessment and the available methods as well as the data and results of assessment studies to enable their independent review and analysis.