Back to documentation center

How to prepare and upload data (html)

Open this page as a pdf.

The INTERVALS platform and its associated data warehouse were created as a sharing platform for all studies, protocols, and data related to risk assessment of potential and candidate modified risk tobacco products as well as for reporting mechanistic investigations linked to tobacco-related diseases and pathways of toxicity.

Since such information will be uploaded from different actors to report on different study types and assays producing many different data types, a flexible concept for storing data and metadata was implemented in the INTERVALS data warehouse, even though we will make it possible in the near future to also upload files in standard/regulatory formats (e.g., SDTM, ADAM, SEND, Isa-Tab, see Figure 1).

With the introduction of data schemata accompanying every dataset, our aim was to offer the needed flexibility for uploading new and modified endpoints while adding capabilities for semantically annotating and verifying datasets to allow for easy retrieval, interoperability, and meta-analyses. We also decided to split the data and metadata files to ease preparation of files (possibly by different scientists and/or laboratories) and retain as much information as needed to understand what was measured, how it was measured, and what were the results obtained, so the datasets can be reanalyzed meaningfully.

Following this concept, datasets are composed of four components:

The relationships between these 4 components can be seen in the Figure 2 and more details will be given in the following sections. First, the metadata and data schemata will be described together since they have the same format. Then, the distinct cases for uploading different data types (tabular or non-tabular) will be outlined. 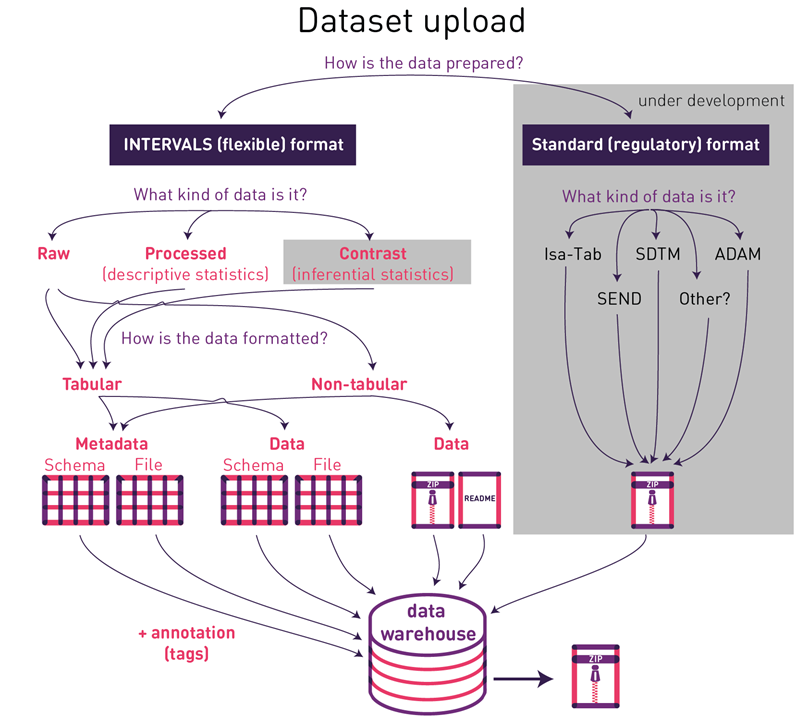 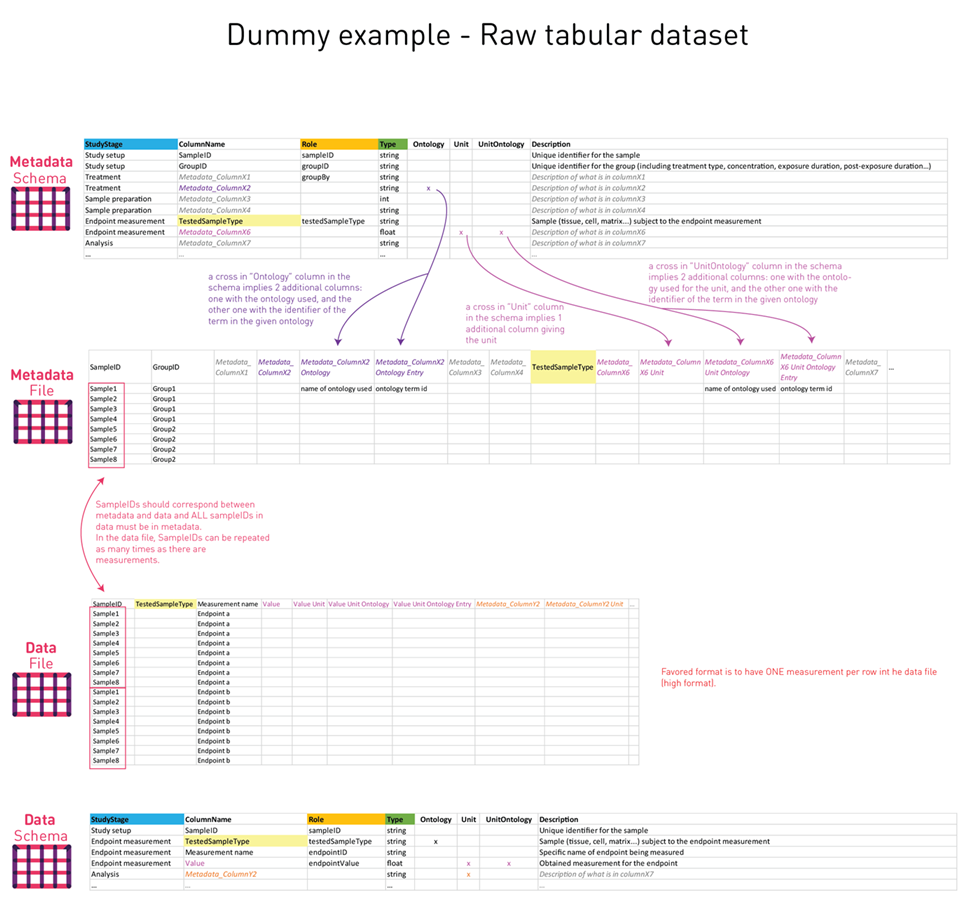 Figure 2 -The four components of an INTERVALS dataset and their interrelationship.

The schemata define the columns and properties of the columns of the (meta)data files. Unique identifiers, the sampleID in this case, are used to link metadata and data.

Metadata and data schemata should be uploaded in a tabular form - csv, tab-separated and Excel are supported currently. In any schema, the following eight columns have to be included:

A. StudyStage: This groups the information about the dataset into different stages: study set up, treatment, sample preparation, endpoint measurement, and analysis (Figure 3). This information would be especially helpful if we want to produce Isa-Tab files for export.

B. ColumnName: Names of the columns as found in the respective metadata or data files. A relevant ontology term or common vocabulary should be used whenever possible.

C. Role: Because not everyone will have the same column names, but it is important to recognize key columns types in every file for the validation and to allow for any analytics and meta-analysis, specific mandatory data columns are specified in the role column. They will be treated specifically during the data upload and validation process, as well as for data visualization, meta-analyses, and by any other analytical tool that will be made available on the platform. At the moment, possible entries in this column include “sampleID”, “groupID” and “contrastID” in both metadata and data schemata, “fileReference” in metadata schemata and “endpointID” specifying the specific endpoint and “endpointValue” specifying the primary readout in a data schema. Additional specific data columns could be added later providing means for the automatic processing of the datasets. The full list of available roles can be found here.

D. Type: This specifies the type (e.g. string, float, int,...) of (meta)data expected in the column.

E. Ontology: This column is marked with an “x” if the (meta)data is annotated with ontology terms in the (meta)data files. In this case, three columns are expected for this (meta)data entry for 1) the human readable term, 2) the ontology the term is taken from and 3) the identifier of this term (e.g. “tissue”, “obo”, “UBERON_0000479”). A specific naming scheme for these columns in the corresponding (meta)data files is also expected and datasets not following this scheme will not pass the validation performed during the upload process (see below). According to this scheme, the column headers of the 2nd and 3rd column have to be the original column name given in column A of the schema file followed by “Ontology” and “Ontology Entry”, respectively. For example, the two additional columns “MaterialType Ontology” (value: “obo”) and “MaterialType Ontology Entry” (value: “UBERON_0000479”) have to be added following the metadata column “MaterialType” (value: “tissue”) (Figure 2).

F. Unit: This column is marked with an “x” if the values are given in a specific unit. Two columns will be included in the (meta)data files for 1) the numeric value and 2) the unit.

H. Description: This is a free text field with a human-readable description of the (meta)data in this column. This information is essentially to understand the content and the structure of the dataset and, thus, providing this information is mandatory.

Examples of a metadata and a data schema are available here.

Tabular data is composed out of metadata and data schemata, the metadata file and exactly one data file, all provided in csv, tab-separated or Excel file format.

The metadata file has one line either 1) per sample or 2) per group of samples.

To be able to reference to a specific sample, group, or contrast between two groups, one column with the role sampleID/groupID/contrastID has to be provided, respectively (Figure 4). Otherwise the validation of the dataset will fail (see below). Additionally, the sampleID/groupID/contrastID will be used to match metadata to data. To be able to do this unambiguously, one of the identifiers, the primary identifier (PID), must be unique, i.e. one specific value can only occur once in the metadata file. 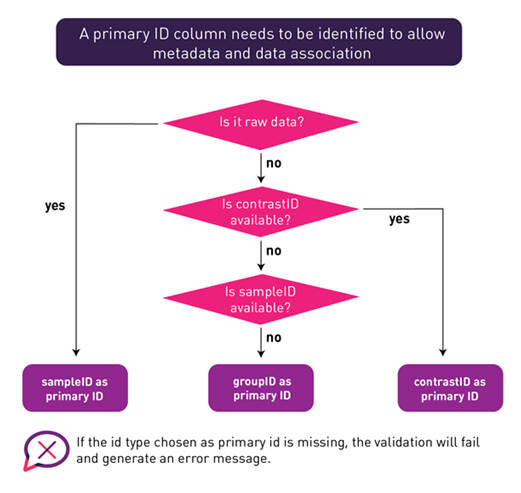 The primary ID is assumed by evaluating the following rules (Figure 4):

SampleIDs/groupIDs/contrastIDs (primary identifier but also others if they are given in both data and metadata files) not matching between the data and metadata file will result in a warning during the upload validation process. Another validation criterion is the consistency of the columns and types in the schema and the corresponding meta(data) file. Data files need to provide an endpointID and endpointValue column, which represent the primary readout of the experiment.

Non-tabular data in the definition of INTERVALS can come in many different forms like cel file, images from high-contents imaging or standard file formats used in different databases and supported by analysis and modeling tools. The metadata schema and metadata file have the same format as in the tabular case but the metadata columns are adapted to cover information on the data files. One important addition is that a column with the data file name has to be provided marked with the role “fileReference” (since only one data file is supported for tabular data, this column is not needed for such data). Data can be provided as sample-specific files (like cel files or images from high-contents imaging experiments) or combined in one file with e.g. fold changes for multiple samples. In the latter case, additional information like the column/row number in which the data for the specific sample is stored can be provided. If the sample identifiers change between the metadata and data files, which might be the case if the data is duplicated from another database, this also has to be specified. Even if the upload of multiple files is supported to allow sample specific files, only one file type can be associated with one dataset. Multiple columns labeled as role “fileReference” will result in failing of the validation process as will do uploading of files referenced in column not labeled “fileReference” or not referenced at all. The only exception are zip files packing together all the sample-specific files, which will be unpacked during the upload process. Finally, a readme file has to be provided for a non-tabular dataset describing the data file format.

INTERVALS datasets are composed out of 4 files in csv, tab-separated, or Microsoft Excel file format: 1) metadata schema, 2) metadata file, 3) data schema (tabular data) or read-me file (non-tabular data) and 4) data file. The creation of these files is described in this tutorial. 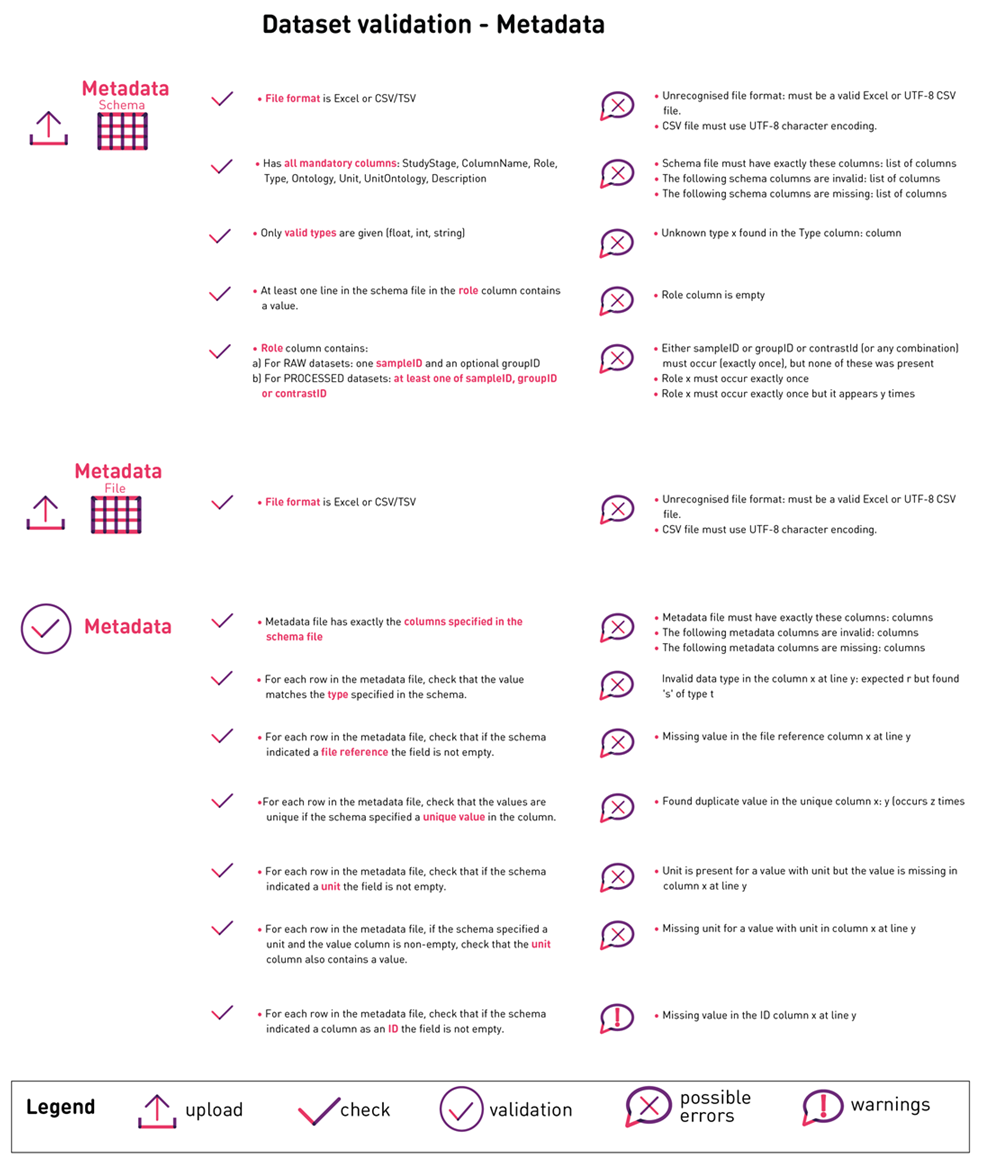 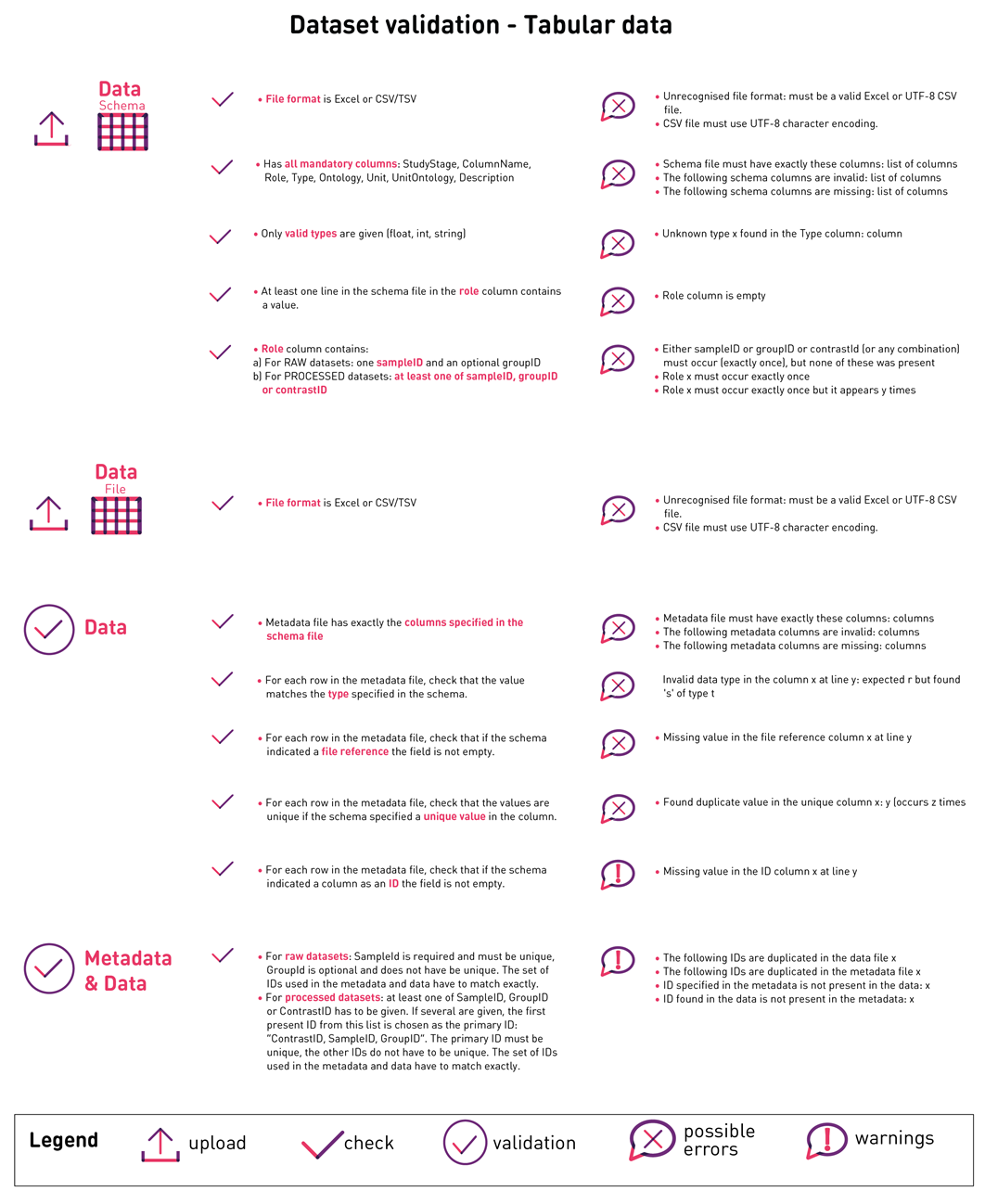 All validations that are performed for metadata files are also performed on data files (except the mandatory presence of units). In addition, the following validations are performed: For RAW datasets: SampleId is required and must be unique, GroupId is optional and does not have be unique. The set of IDs used in the metadata and data have to match exactly. 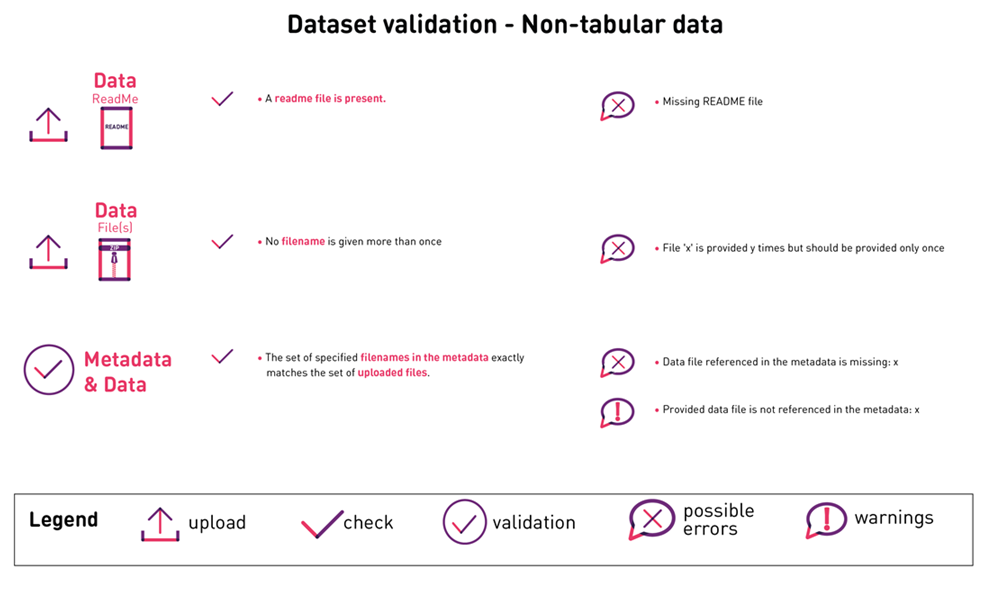